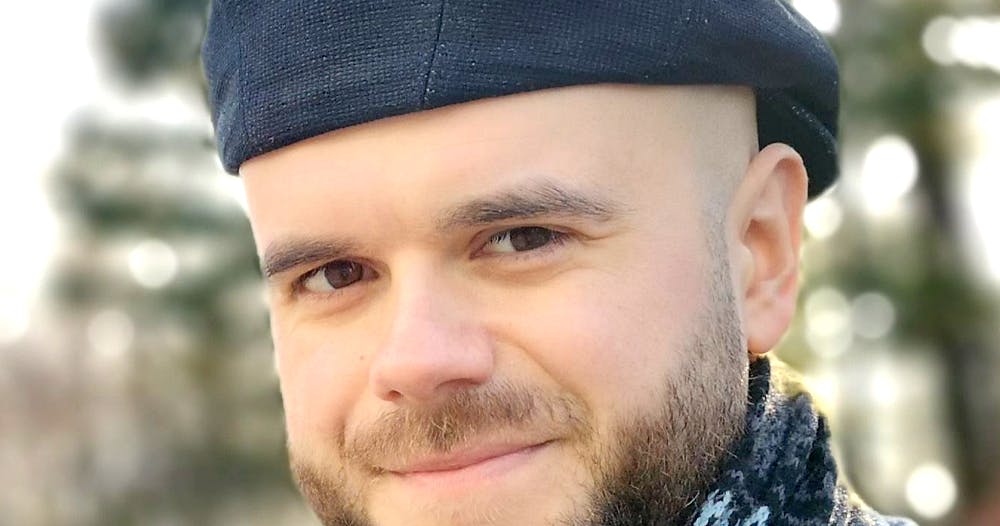 “Automating processes is rewarding. It is saving someone else’s time.”

This challenge was for our colleagues a great time to step away from the computer. Put the self-critic aside and do some exploratory writing to take the pressure off.

Even if at the beginning they weren’t comfortable writing about themselves, they learned where to start or what to leave out. And most important, each team member learned that he is different. In a clear, concise, and confident way.

Adi started his story with the basics. He shared his experiences without searching for perfect words.
If you want to know Adi as he is, you have this blog post.

I’m Adrian. A 34 year-old  curious soul in search of knowledge about  technology, automation, human nature and the way one influences the other.

Currently I am an automation engineer. I mostly write Puppet code for the automation of the installation and configuration process for packages in various Linux distributions.

I also recently took up the challenge to build a private Debian repository server that will act as a fail-safe tool in case the official repositories would be non responsive when a Linux package is to be installed.

Why do you do what you do? What drives you to get out of bed every morning and go to work?

Being a part of the creation of a bleeding edge product and seeing it develop in real time is one thing that gets me out of bed. Another thing is my pet rabbits that do their out most to make sure I know they are hungry.

Semi-joking aside and returning to the first point, I think that the fundamental factor in my motivation is the pure fascination for the process in which dreams are turned into reality.

My wife Roxana is one of the founders. I had the privilege to be part of Bunnyshell from its beginnings, witnessing the challenges, hardships and overall risk that came with creating a company from scratch. So you might say that there is a deep personal insight and motivation. Which is both intrinsic and extrinsic in its nature.

How did you get here?

You might call it luck or destiny, depending how you look at it. I knew, of course, about my wife’s plans to go into business before Bunnyshell was actually created. However I didn’t initially think about contributing to the project directly.

Moreover, at that time I was just starting to learn Linux and Bash scripting. And I was thinking about going into a career as a system administrator. So there came a point when I actually took steps to do that and was even called to an interview when I received the news that Bunnyshell was going to happen and it needed someone on the automation side.

I decided to go for it and for the first 3 months, I learned Puppet at the job while also building on my skills in Linux and Bash. As time went on, I came to see my work used in production.

How does your background make you unique?

Our backgrounds make us all unique in a certain way. My way changed a lot of times as I have the type of temperament that drives my curiosity into many areas. I studied economics and computer science in college. Then, I worked in technical support for about 8 years.

In this time I got interested in psychology. Probably as a result of interacting with a lot of people from different countries and cultures.

In terms of the work you do, what aspects are you most passionate about and why?

The most rewarding feeling I get in my job is the satisfaction as a result of building something useful. An extension of this is the fact that automation is saving someone else’s time.

We all know how valuable time is and how difficult it is to use it efficiently. So I feel in a certain way that I do my small part to meet this fundamental need.

What do you usually do in your free time?

I devote a lot of my free time learning psychology and associated subjects, as I will be a student once again starting this October. Apart that, I try to fill my spare time with as much meaningful things as possible. By that I mean devoting time to family, friends and pet rabbits. As well I am paying attention to my own faults and strengths and try to better myself as much as possible.

Do you know what you’re good at?

Modesty aside, I believe I do. I’m fairly adept at listening to people, formulating theories and ideas, music and possibly (and hopefully) writing.  My wife says I’m good at Puppet too… (laughing)

What makes you offbeat, interesting, different from the rest?

As an exercise of self-analysis, I would say that my lateral thinking skills and exaggerated expressivity as a result of extraversion can definitely raise eyebrows sometimes, especially in a group of people. I tend to be more reserved in one to one interactions, although I think that many people I met would definitely call me… different.

What makes you human?

The capacity for empathy as well the expression of it. The capacity to enjoy the apparently small and trivial things.

The realization that I have faults and weaknesses and hidden aspects of being outside my awareness and that sometimes these aspects can manifest themselves in an unexpected way.

Tell us something odd or unusual, something most other people wouldn’t say or would be afraid to say.

I think that there is a general tendency for people to refrain from speaking the truth – both toward themselves and others and for various reasons. And this is, in my opinion, one of the most unfortunate ways to conduct one’s life.

The truth is, of course, sometimes subjective and even unknowable, but even so we all have the power to refrain from speaking something we know to be false.