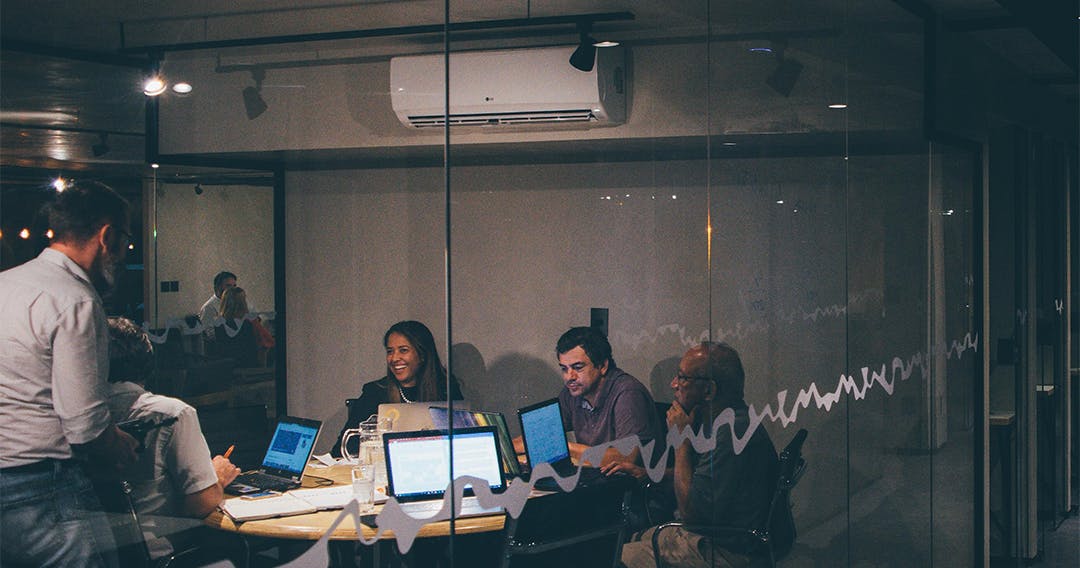 DevOps in a Nutshell – What Is DevOps, Really?

How Does DevOps Work

Coined by Patrick Debois back in 2007, the term ‘DevOps’ refers to bringing Development and Operations together, thus extending Agile development as a philosophy to enhance the software delivery process as a whole.

Although quite some time has passed since then, organizations still have different views on what is DevOps exactly, which is why we asked several DevOps practitioners to let us know their thoughts. Hopefully, by the end of this article, we’ll be able to clear things up. 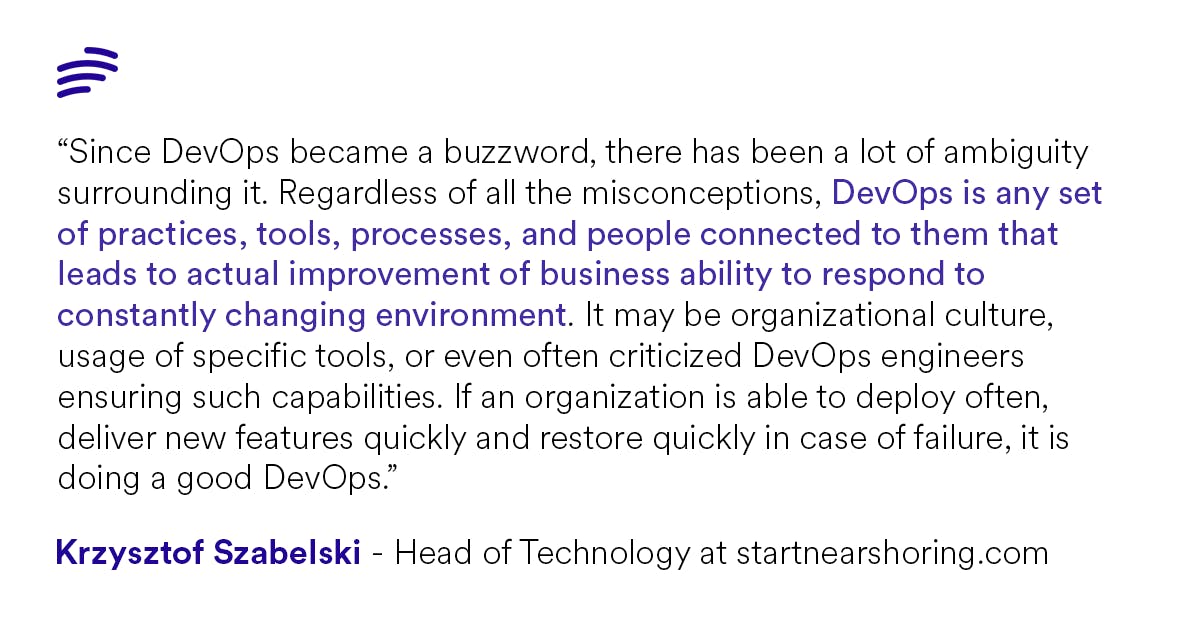 “Since DevOps became a buzzword, there has been a lot of ambiguity surrounding it. Regardless of all the misconceptions, DevOps is any set of practices, tools, processes, and people connected to them that leads to the actual improvement of business ability to respond to constantly changing environment. It may be organizational culture, usage of specific tools, or even often criticized DevOps engineers ensuring such capabilities. If an organization is able to deploy often, deliver new features quickly and restore quickly in case of failure, it is doing a good DevOps”

DevOps is a mixture of culture, development, operations, and tools that improve an organization’s ability to produce applications and services at a high velocity: developing and enhancing products at a faster rate than traditional software development and infrastructure management processes. Because of this speed, organizations can better serve their clients and compete in the market.

In the DevOps model, Development and Operations teams are no longer ‘siloed.’ Instead, they are combined into a single team where the engineers work through the entire application lifecycle, from development and testing to implementation and operations, and develop a diverse set of skills that aren’t limited to a single role.

In some DevOps models, Quality Assurance and Security teams may become more closely aligned with Development and Operations, as well as across the application lifecycle. When everyone on a DevOps team is focused on security, this is referred to as DevSecOps. 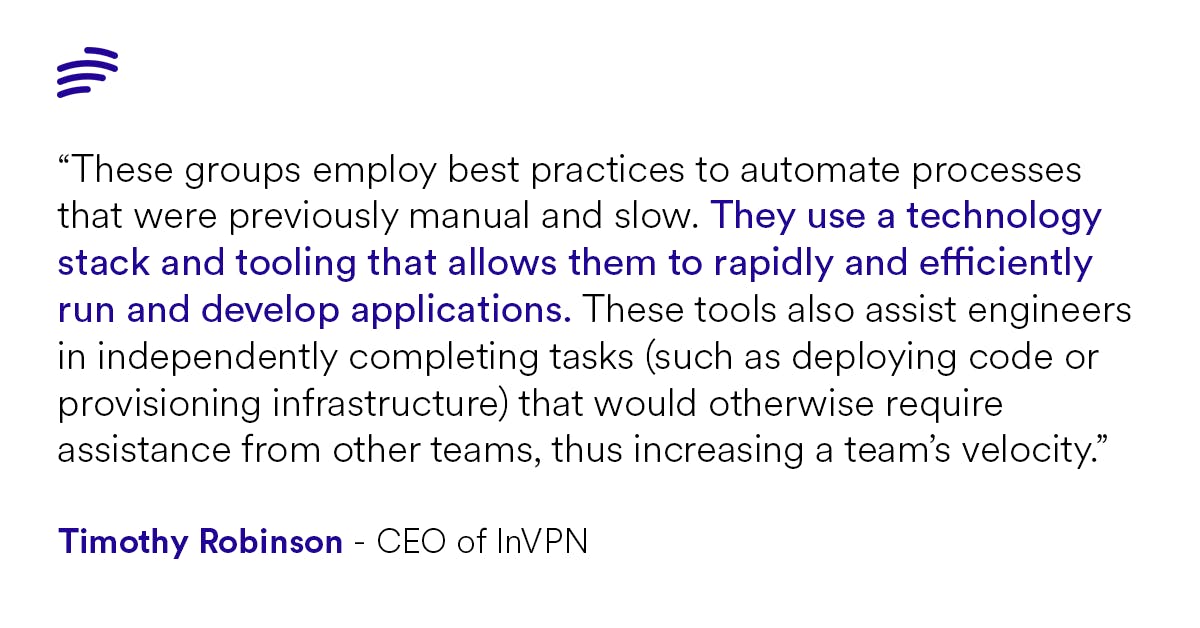 “These groups employ best practices to automate processes that were previously manual and slow. They use a technology stack and tooling that allows them to rapidly and efficiently run and develop applications. These tools also assist engineers in independently completing tasks (such as deploying code or provisioning infrastructure) that would otherwise require assistance from other teams, thus increasing a team’s velocity”

It’s important for developers to have switches and dials that enable Ops teams to disable or turn down features when traffic spikes or problems occur. Furthermore, allowing read-only mode for large portions of the application will go a long way toward ensuring uptime in a pinch.

To enable agile and ongoing implementations, Operations engineers may provide support and collaborate more closely with developers. Teams must collaborate closely in order to establish the required trust, as well as develop effective and repeatable processes to support it. 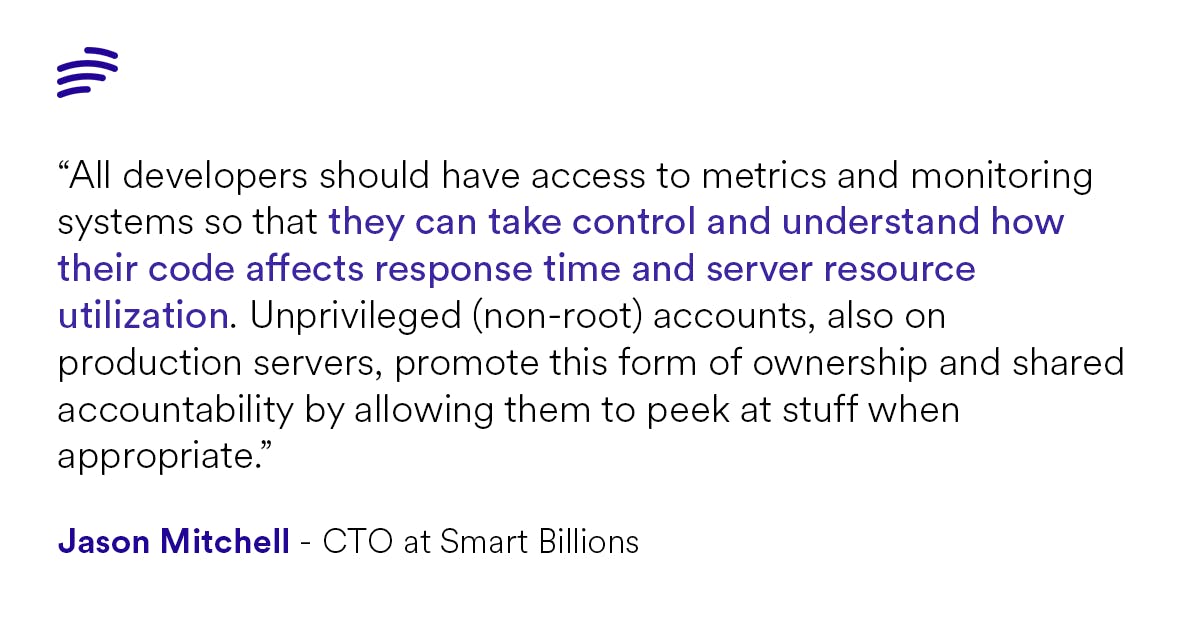 “All developers should have access to metrics and monitoring systems so that they can take control and understand how their code affects response time and server resource utilization. Unprivileged (non-root) accounts, also on production servers, promote this form of ownership and shared accountability by allowing them to peek at stuff when appropriate”

As with any other software development methodology, there are also misconceptions when it comes to DevOps. Here are the most common ones:

1. DevOps is just a culture: DevOps consists of principles, practices, methodologies, and tools that enable organizations to:

2. DevOps is just tools: although tools are crucial to DevOps, you can certainly not reduce it to just that. On the contrary, automating processes without a clear vision can do huge damage, while automating them following the right principles can bring many benefits.

4. DevOps is here to take our jobs: probably the biggest misconception out there is that, by implementing DevOps into an organization, the developers will take over Operations and do it themselves, which will leave Ops engineers without their jobs. This couldn’t be farther from the truth. As the business climate becomes more fast-paced, teams need more agility, which means that either Ops people do some automation development or developers are writing “Operations” code (or both). DevOps is not about one team wiping out another but about developing a new skill set.

Can you recall the days when release management was an afterthought for the project and fell upon someone on the development team? Typically, that person was the one who drew the short straw. Releases were folders in a file share, bad code would be checked in, and the QA team would lose a day because what they were supposed to test would not compile.

It’s hard to imagine that in today’s development landscape, where we have companies like Netflix that make hundreds of deployments per day. 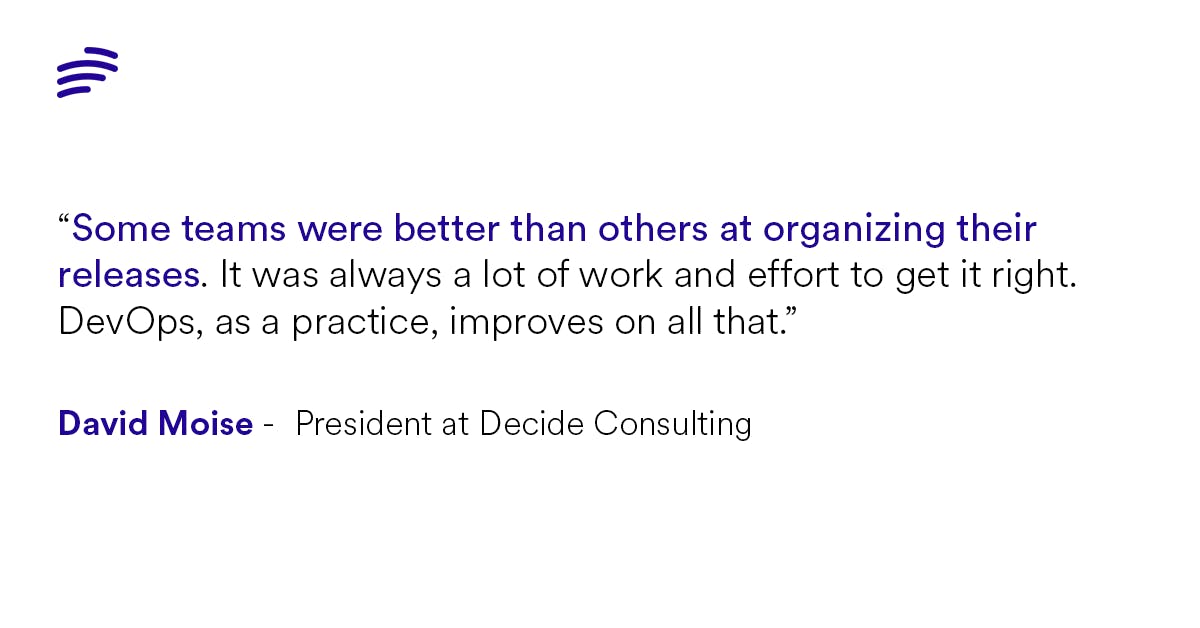 “Some teams were better than others at organizing their releases. It was always a lot of work and effort to get it right. DevOps, as a practice, improves on all that”

Well, thanks to Patrick Debois, John Allspaw, and Paul Hammond, who made a case on why communication and collaboration between Development and Operations are vital, today we have what we know as DevOps. (Read more about the history of DevOps)

How Does DevOps Work

DevOps focuses on something known as Continuous Integration. It uses a central repository to store code in, and developers continually merge their work with each release. This framework lets developers automatically run tests against their new code, finding bugs and issues before any problems are accidentally released into the live environment and ensuring high-quality products.

As each new change is made, the code is built and tested automatically, meaning that there’s always a version of the code ready for deployment. This is a huge advantage for organizations that release software often, allowing for bug fixes and deployments with seamless operation.

Developers can leverage the infrastructure of the operational environment within their code, letting them trigger different tools and services across the organization from within their application. Examples of this are change management controls, network and firewall configurations, backups, and more. Specific actions can be automated and managed from within the code, giving developers control of the infrastructure. 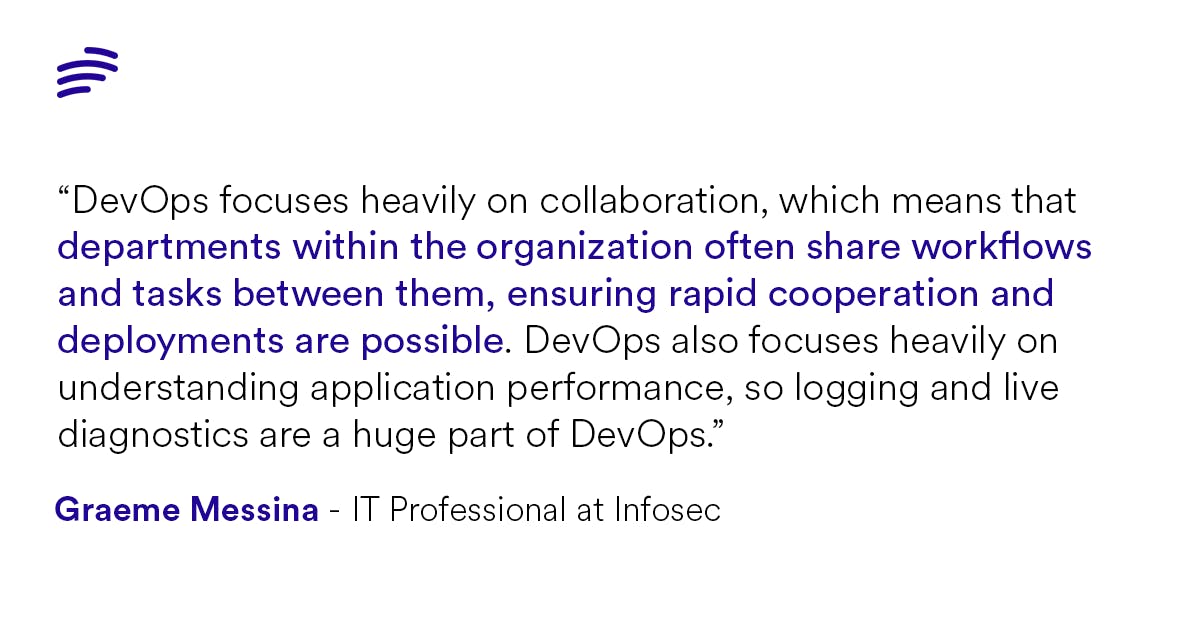 “DevOps focuses heavily on collaboration, which means that departments within the organization often share workflows and tasks between them, ensuring rapid cooperation and deployments are possible. DevOps also focuses heavily on understanding application performance, so logging and live diagnostics are a huge part of DevOps”– Graeme Messina, IT Professional at Infosec.

Dmitry Vaskovskyi from Software Planet Group defines DevOps as a “combination or intersection of the Development and Operations functions, with a very narrow application. Many of the DevOps functions, however, can be automated. For example, manual operations such as integration, testing, or deployment can be replaced with automated scripts and fully automatic products”. On the other hand, “automation means replacing manual operations with automatic ones. It can be applied at various levels within the organization”.

Read more about DevOps vs Automation and the goals of automation in our dedicated article.

Agile is a software development methodology that focuses on collaboration, organization, and feedback to deliver value to the end-customer faster and more efficiently. The DevOps model is a collection of practices and tools that enable teams to deliver applications and services more rapidly, frequently, and reliably. It automates manual (and slow!) processes, enabling engineers to accomplish tasks independently that would otherwise require help from other teams, which further improves the speed at which new features can be implemented.

Because of this, Agile and DevOps are not mutually exclusive – instead, they can be used together for best results. Learn how in our dedicated DevOps vs Agile article.

Both SRE and DevOps are methodologies addressing organizations’ needs for production operation management. Some say SRE is an implementation of DevOps. The SRE team is not solely responsible for the deployment, configuration management, monitoring, and metrics; they also provide a bridge to the developer team to ensure that the whole team can deliver a product/system that is updated, managed, and monitored effectively.

While DevOps aims to maximize operational processes and increase speed, the SysOps approach is focused on making the system processes work smoothly in an organization. For SysOps, the configurations are taken care of at individual levels, being centralized around infrastructure, compared to DevOps, which, although it has the same way of managing infrastructure, relies on the latest automation tools to get it taken care of.

Just like Agile and DevOps, SysOps and DevOps can also be used together to better address customers’ needs.

The two concepts are not mutually exclusive, but they do have different goals. DevSecOps can be seen as a subset of DevOps focused on security – it’s not only compatible with DevOps but also necessary for it to work optimally.

Find out more about the differences and similarities between DevOps and DevSecOps in our dedicated article.

What Are the Benefits of DevOps

Organizations that implement DevOps practices report significant benefits, such as:

But that’s only if you implement DevOps right:

“As a reliable software development firm, we follow the DevOps strategy in the following four ways –plan, develop, deliver, and operate.

Studies show that 74% of companies have implemented DevOps in some fashion. And we’re not only talking about giants like Netflix, Facebook, and Amazon – any tech company can reap the benefits of DevOps. Software speed, stability, and availability contribute to organizational performance (including profitability, productivity, and customer satisfaction), and top performers are twice as likely to meet or exceed their organizational performance goals.

While DevOps’ main goal is to reduce the chaos generated by complexity, recent data shows that, with the explosion of tools and different practices for different clouds, technologies, etc., we have now reached a point where DevOps does the exact opposite when applied inappropriately.

Bunnyshell comes as a solution to this – a way to simplify and standardize processes and workflows in the release cycle through automation and by enabling teams to gain a holistic approach to the entire infrastructure and all related activities.

If you’re looking for a way to get started with DevOps today, feel free to check out Bunnyshell.